Apartments Ivan are situated in the quiet and agreable part of Supetar on the island Brac, and are owned by family Lenic. They are integrated part of our family house, completely air conditioned and furnished for your comfort and perfect family vacation. Parking place and barbecue are also present in front of the house.
If you are looking for a possibility to spend quiet and memorable holiday with your family far from the stress of modern life this is the right place.
Location
The center of Supetar is 800 meters from our house and the sea is 200 meters away. The beach is sandy and suitable for children. There are also tennis sport center and supermarket nearby.
Supetar
In Supetar you can find all sorts of beaches, such as sandy, rocky and gravel. There is also variety of restorants, bars, amusement and sport centers, monuments... 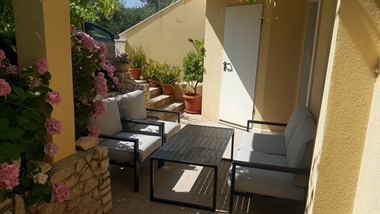 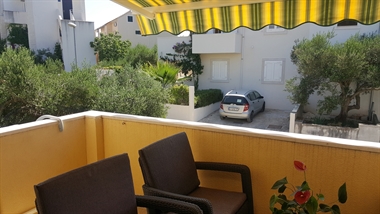 Brac (pronounced is an island in the Adriatic Sea within Croatia, with an area of 396 square kilometres making it the largest island in Dalmatia, and the third largest in the Adriatic.
It is separated from the mainland by the Brac Channel, which is 5 to 13 km wide.The island's tallest peak, Vidova gora, or Mount St. Vid, stands at 778 m, making it the highest island point in the Adriatic.
The island has a population of 14,436, living in numerous settlements, ranging from the main town Supetar, with more than 3,300 inhabitants, to Murvica, where less than two dozen people live. Bol Airport on Brac is the largest airport of all islands surrounding Split.
About Supetar
Generaly about Supetar
Supetar with it’s 3500 habitants is the biggest town on the island Brac. The biggest city in Dalmatia, Split is only 50 minutes of agreable ferry ride away. Supetar, in spite of being the biggest town on Brac is still only small mediteranian place made for comfortable living and everything is nearby: restaurants, shops, banks, post office, hospital, various sport centers...
Culture
Besides beaches and restaurants, you can visit the church of the Virgin Mary’s Annunciation with the bell tower and the church museum. On the entrance of the museum is a sculpture of St. Victor.
We recommend the visit to Mausoleum of the Petrinovic family, constructed by the famous croatian sculptor Tomo Rosandic (1878-1957) situated on the local cemetery near the church of St. Nicolas. There are also two early christian sarcophaguses near the church, and under the church you can see the remains of the roman villae rusticae.
During The Supetar Cultural Summer festival you can attend to numerous free stage plays and concerts as well as many other events that will make your stay even more interesting.
Supetar is an ideal destination for people who want to enjoy the rich cultural heritage of central Dalmatia (Dioklecijan palace, Trogir, Salonae, the cathedral in Sibenik), as well as the one on the island Brac itself (the desert Blaca, museum of Brac in Skrip...).
Sport
There are various sport fields in Supetar: football, table tennis, basketball, volleyball on sand, tennis... You will also find the diving center where you can rent diving equipment. On the beaches you can rent all sorts of summer utilities. So, if you prefer sport and active vacation this is the place to be.
Climate
Brac and Supetar are situated in the mediteranian climate which is known for its long and hot summers and mild winters. This area is blessed with more than 2700 sunny hours in one year. Average temperature of the sea during the summer is about 22°C which is perfect for agreable swimming during hot summer days. Extra refreshment is insured by maestral, the summer wind which blows mildly during the day.
Excursions
We have many excursion possibilities, Supetar being near two locations under the protection of UNESCO (Trogir and Dioklecijan palace in Split). You can also visit various locations on Brac such as Blaca desert, museum of Brac in Skrip, or you can enjoy on the most beautiful beach on the Adriatic, Zlatni rat in Bol. Excursion boats can also take you to island Hvar and to the canyon of the river Cetina and Omis.
How to find us?
The nearest big city to Supetar is Split. When you arrive in Split by train, bus, car or airplane, all that separates you from Supetar is 50 minutes of interesting ferry ride. During the summer there are more than 14 departures daily so you can get to Supetar without any problems.
Another possibility is to land directly on the Brac Airport, some 35 kilometers from Supetar.